As in all things, Eat Logic are ahead of the pack as they kick off the London Jazz Festival season this week with their unique and forward-looking brand of improvised acoustic-electronica. 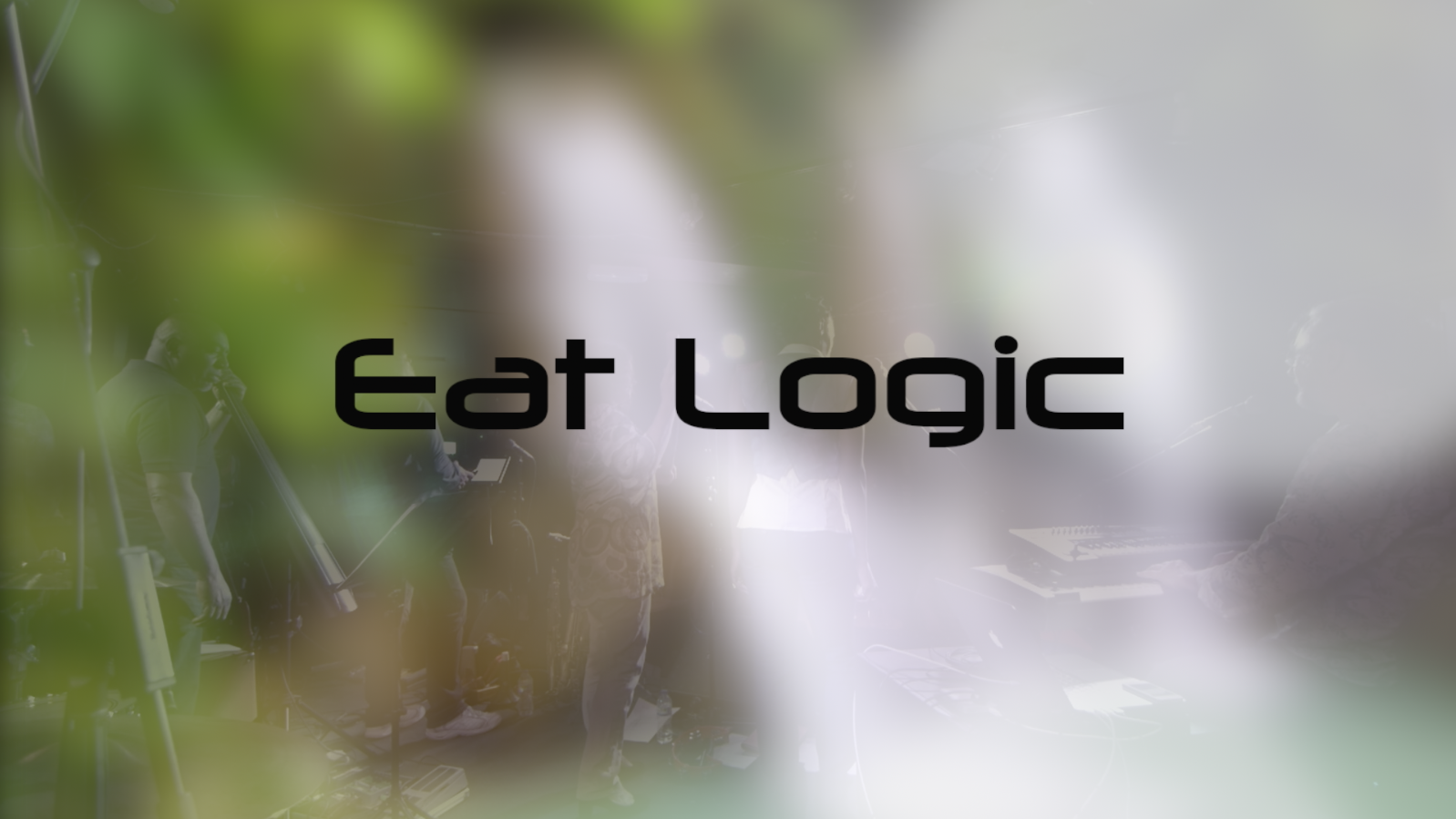 ‘Jazz’ as it originally evolved reflected the current sound of the streets until it got stuck in the 50s. Now Eat Logic are here to remind us that the sounds of THEIR street are drum & bass, UK garage, broken beats and funky soulful house. They’ll also be delivering some challenging acoustic jazz compositions and arrangements that have been gaining enormous popularity with audiences.

Miss this and miss out. Buy your tickets by clicking on this link 😉

This is ‘Magaso’ from our EP launch on August 4th. If you like what you hear, you can buy tickets for our November 11th gig at the same venue by following this link.

This is a review of our recent gig live at The Crypt in Hastings, very kindly written by Rod Hunter.

The Crypt is unmistakably back in Hastings. Six weeks of exciting events since their launch on 30th August has featured bands from near and far and is already inspiring comments like ‘the best jazz club outside of London’. If this is indeed the case, then last night was a match made in heaven as Eat Logic took the stage in front of an appreciative audience.

From the get go it was obvious that this was not going to be an average ‘trad jazz’ evening as the band launched into the first of their instrumentals, a blistering funk-rock workout that wouldn’t sound out of place in a 70s action film. But despite the passing retro reference this is a band firmly rooted in the present, as the next two hours were about to show us.

What followed was an eclectic fusion of contemporary jazz, chillout, drum and bass, nu soul, UK garage, soulful house, funk and Latin – all in the context of an electro-acoustic soundscape. The well thought out arrangements, complex time signatures and sense of harmonic adventure roots the band firmly in the Contemporary Jazz category, but to shut them up in this box would be to do them a great disservice. Each genre they passed through sounded natural and authentic, though their overall sound remains cogent thanks to consistent instrumentation and compositional style. At one point they dropped down to a five piece to deliver an exquisite arrangement of Paul McCartney’s Blackbird, beautifully sung by Alison Limerick – already a future show stopper if audience reactions are anything to go by.

The world-class musicianship of this band cannot be passed over in any complete appraisal of their performance. All of Eat Logic’s members are master musicians and singers whose work ranges from top jazz artists Jason Rebello, Courtney Pine, Hugh Masekela and Roy Ayers to icons of ‘the UK sound’ such as Massive Attack, Basement Jaxx, Imogen Heap and Labrinth. This love of the traditional mixed with the very newest sounds and ideas in music is perhaps what makes Eat Logic unique and perfectly explains their description of themselves as a ‘future jazz collective’.

Sax player Roberto Manzin’s playing showed a deep study of the jazz vocabulary, delivering an individual and intricate melodic and harmonic flow contained (barely) in highly-charged solos. Trumpeter Kevin Robinson combined formidable chops with great tonal versatility, coaxing other-worldly sounds from his instrument. Drummer Jerry Brown drove the Eat Logic machine forward with expert use of polyrhythms and displacement, delivering power when needed with minimum effort, and showing the greatest sensitivity for what was being played around him.

Winston Blisset alternated between electric and (electric) upright bass, playing to each instrument’s greatest strengths and underpinning Eat Logic’s sound perfectly. Alison Limerick displayed an impressive range coupled with the perfect tone for pieces like Blackbird – almost Simone-esque in places – and her improvisation mixed great melodic dexterity with a joyous energy that irresistibly pulled us along with it. Guitarist Dave Ital was on top form with a fluidity of playing that was a beauty to behold and Anita Kelsey’s warm soulful tones contrasted perfectly with her stage sister’s jazzy flavours, with her performances lending a light and refreshing element to the band’s set.

Keyboardist Gordon Hulbert, the bandleader, is the driving force behind Eat Logic and his sound palette is a significant identifying feature of the band’s sound. Think Joe Zawinul, Lyle Mays or Herbie Hancock, only with a 21st century twist. Gordon’s playing obviously draws from a wide range of influences, from the gospel style piano of Blackbird to soaring synth solos and Smith-like hammond organ work, but his strength lies also in the supporting role he plays in helping to create the atmospheres for the soloists’ flights of fancy.

I had a feeling that I was witnessing history last night as Eat Logic, only two gigs into their career, delivered two sets of finely honed pieces as if they’d been touring them for years. This is a band destined for the major jazz stages of the world, so catch them now and watch their rise to the top!

The Crypt continues with their plans to support some of the best local jazz, funk, soul and blues talent, so I look forward to seeing many more successful nights like this!

click here to buy your early bird tickets for the show on 11th November. 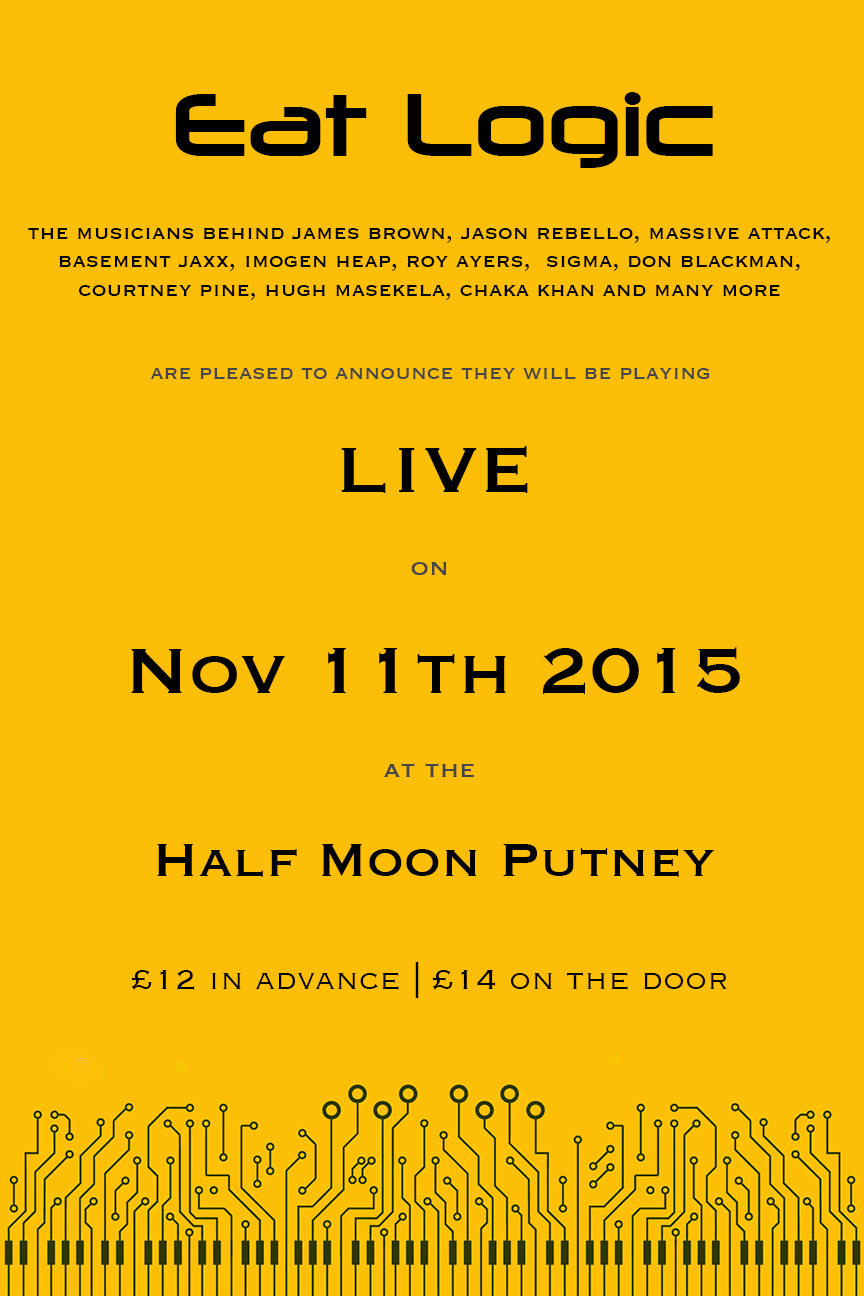 Two gigs in and the band have been putting the tunes through their paces. See and hear for yourself how they’re doing… 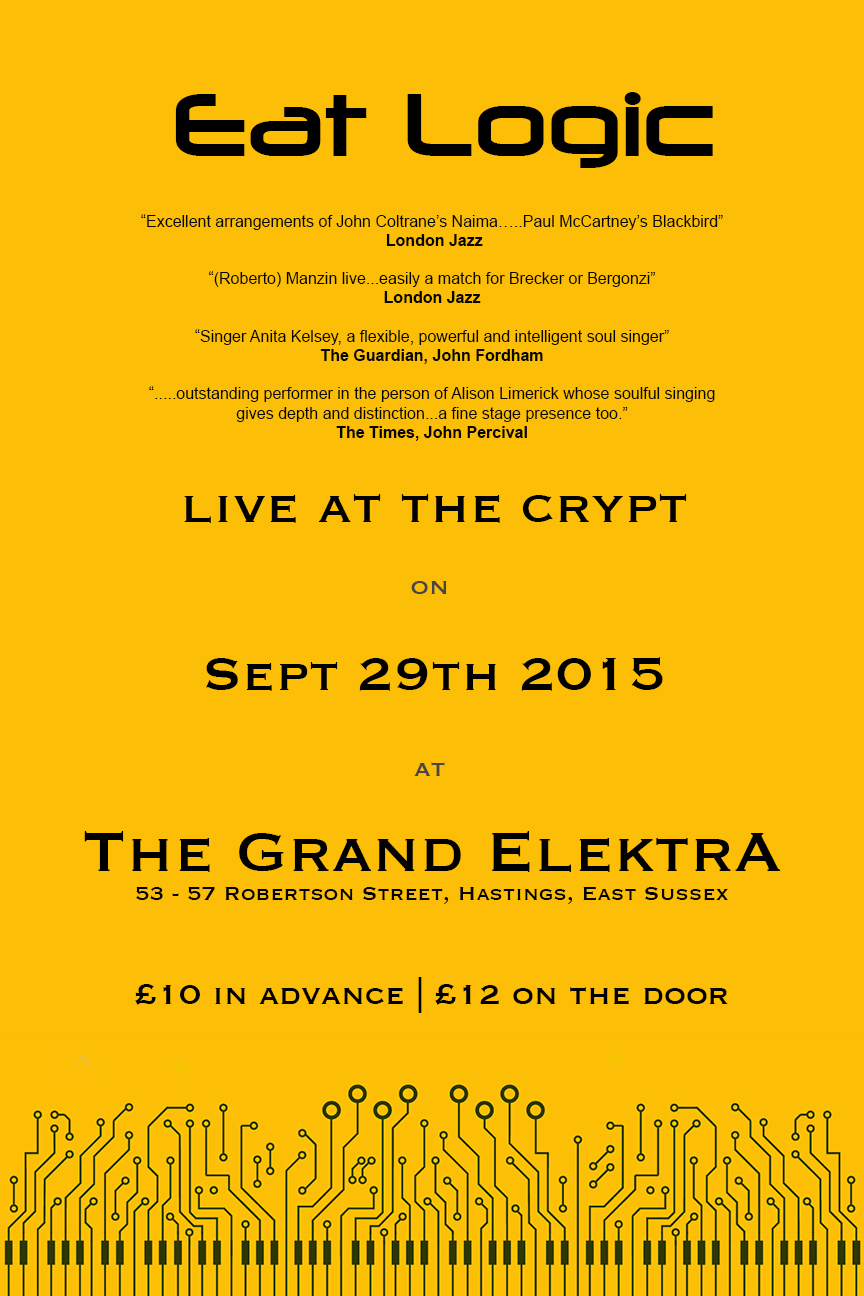 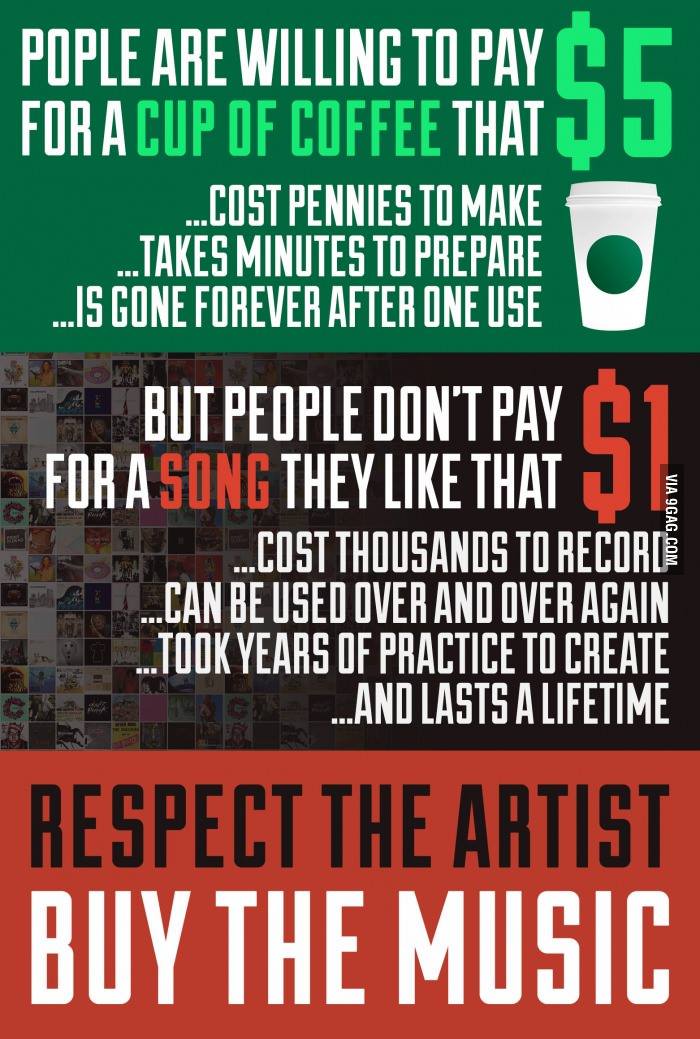 The following is a review from London Jazz News published earlier this week. Original link at the bottom.

“Blending nu-soul with drum and bass, dark buzzy bit-crushed synths with ‘Kind Of Blue’ brass textures, urgent sax extrapolations cascading over epic ethereal filtered pads and vocals ranging from declamatory to introspective, the EP promises to satisfy “Jazz lovers who want a bit of pep when they step out, club-heads who want more than a straight four on the floor and people who love to see good musicians do their thing!” says Gordon Hulbert, the band’s founder, adding “You could say we’re halfway between ECM and EDM”.

The album’s producer, Gordon Hulbert, has been a sideman and musical director playing keyboards with the likes of Chaka Khan, Hugh Masekela, and Imogen Heap while co-producer John Myers, who sings and plays guitar, keys, fiddle and Irish flute, has worked with everyone from Pogues singer Shane MacGowan to Kylie Minogue. The band has two first-rate brass players: Dave Land, who previously played trumpet and flugelhorn with Amy Winehouse, and currently works with the BBC Radio Orchestra; and sax player Roberto Manzin who has been creating quite a buzz amongst London’s jazzerati of late. The rhythm section is truly ‘hot’ and funky: Drummer Paul Jones has worked with artists such as Don Blackman, Rahsaan Patterson, Mica Paris and Loose Ends while bass player Winston Blissett – a founder member of jazz-fusion outfit, ‘Protect The Beat’ – has been recording and touring with Massive Attack for years and also has studio credits with everyone from Cher and Robbie Williams to Basement Jaxx and Reel People.

What excites me most about this band is the tremendous potential of its instrumentalist members to make great music together with not one, but TWO powerful, jazzy and soulful vocalists, Anita Kelsey and Alison Limerick. Alison Limerick has been a front person with UK acid jazz stalwarts The James Taylor Quartet, Vibrasonic, and Courtney Pine. As a solo artist with BMG Records during the early 90s, she scored worldwide hits with ‘Where Love Lives’, ‘Make It On My Own’ and ‘Love Come Down’. Anita Kelsey worked with Sunship’s Ceri Evans on his first jazz album, for which they won a MOBO in 1997. Anita later went on to score hits in the EDM world during the noughties, such as Tiesto’s Falling.

The band’s debut EP has just three tracks: Eat Logic starts out quite aggressively, with frantic drums and cutting synthesizer sounds. The music cools down a little to allow Roberto Manzin to enter the fray with his incredibly fluid soprano saxophone lines, before these ultimately dominate the track, leading to the powerful ending climax and release. The slow funky groove, Magaso, provides the perfect backdrop for Dave Land’s magnificent flugelhorn. Reminiscent of the Cinematic Orchestra, this track opens with industrial-sounding electronic sounds as a preamble to the ‘hooky’ brass riff that sets the mood. The drums never let go of the groove, while the riff becomes totally incessant as the drums build with fills – and all the while the flugelhorn improvisations keep on flowing. Then it’s time for a stab at a more ‘commercial’-sounding track. As soon as Working On It starts playing, you’re going to immediately think Incognito, Lisa Stansfield and Cold Cut, with its instantly danceable ‘house’/’disco’ groove, soulful vocals from Alison Limerick, and an excellent keyboard solo by Gordon Hulbert.

The band’s ‘live’ repertoire will also include excellent arrangements of John Coltrane’s ‘Naima’ in an uptempo ‘house’ style; Paul McCartney’s ‘Blackbird’, mostly in 7/4 but subtly using meter changes; and an interesting composition called ‘Minor Crisis’ which starts in 4/4 then switches between 7/4 and 5/4, with occasional sorties into ¾ and 6/4!

Eat Logic’s debut EP is released on 4th August, their debut gig and EP launch will be at The Half Moon in Putney on that date. Kevin Robinson will dep for Dave Land on Trumpet/Flugelhorn and Jerry Brown will dep for Paul Jones on drums. 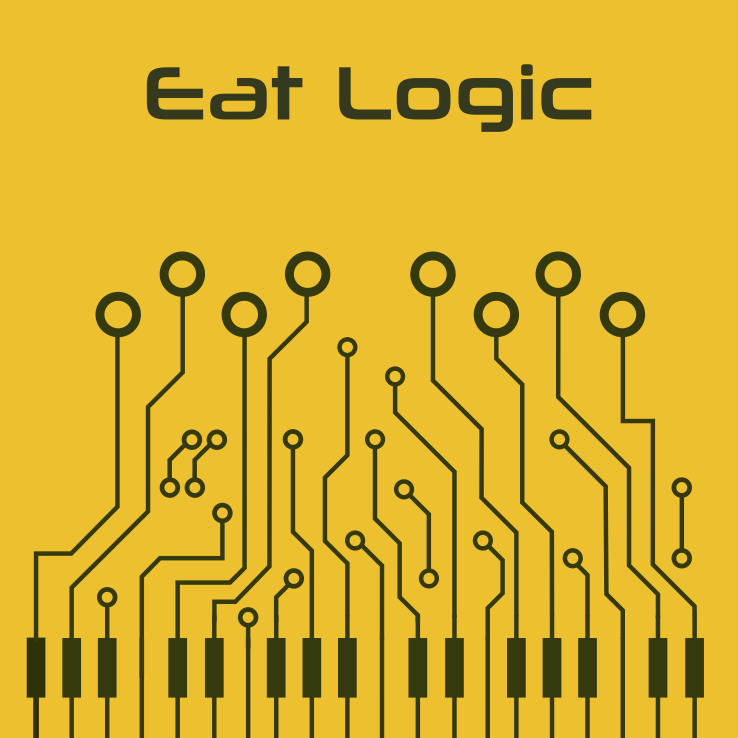 Here’s a small preview of our set on August 4th at the Half Moon Putney. We’ll be playing two 40 minute sets in total, with a bunch of instrumentals and some great songs from Alison & Anita.

you can buy tickets here: Eat Logic at the Half Moon Putney August 4th 2015